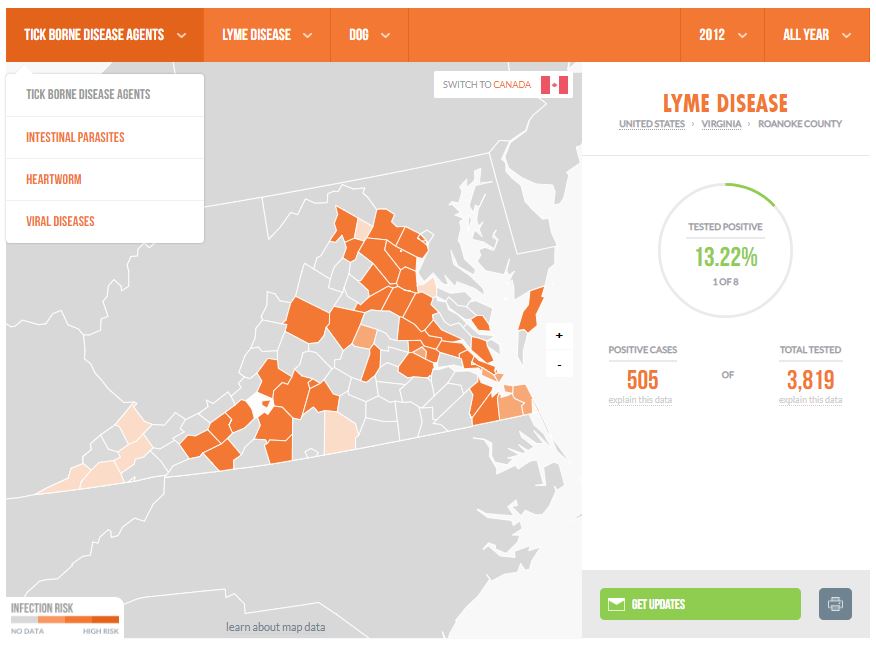 The summer has flown by and now fall and winter are just around the corner! It’s a common misconception that bloodsuckers like ticks disappear along with the risk for disease transmission once there is a frost and the weather turns cooler. Ticks have been known to survive temperatures well below freezing and become active again once temperatures rise above freezing. Some species, like the American dog tick and Lone Star tick are not as active in the fall and winter months. Others, like the Deer tick can remain active in their adult stage from fall to spring as long as the temperatures are above freezing. Some ticks require a winter to develop from larva to nymph. Other species can easily overwinter in protected areas (snow on leaves helps insulate them) that are freezing and below, for prolonged periods.

The most common “large” tick in our area that’s likely to bite dogs, cats, horses, and humans in the fall and winter months is the Deer tick and it can transmit disease-causing bacteria including Lyme. Typically, about 50% of adult Deer ticks are infected with Lyme bacteria. The adult stages of this tick begin to become active as the season changes from summer to fall. These adult stage ticks start to become abundant early in October, and they will remain active throughout the fall and winter months as long as the temperatures are above freezing. The nymphal stage of this tick is active during late spring and summer. During the summer months, there are plenty of these tiny pests out there, but they are just harder to see.

Similarly, even during the coldest months, fleas can be a problem for dogs and cats. Though fleas are not as prolific in the winter, they pose a risk to you and your pets in all seasons. While most life-stages of the flea cannot survive in below freezing temperatures for very long, the most common flea species, Ctenocephalides felis, typically spends the winter on hosts or in protected areas, such as areas under homes, barns, and wildlife dens. These protected areas provide enough warmth and humidity to support flea infestations throughout the winter. As temperatures rise in the spring, immature stages of fleas are able to survive in the environment, allowing for adult flea populations to rapidly increase.

It’s important to make sure your pet is protected during these months. Please call our office if you have questions or concerns about your pet’s prevention schedule. We typically recommend a product called Bravecto for fleas and ticks. It is an oral chew that’s given once every three months and unlike topical prevention, can’t be washed off.

The Companion Animal Parasite Council (CAPC) has a really cool interactive map that lets users select their location and see the prevalence of certain parasites in their area.

According to their website, “the data in [their maps] was provided by IDEXX Laboratories and ANTECH Diagnostics. It is statistically significant and it serves as a strong representation of the parasite activity for each area. However, it does not represent the total number of positive tests. Instead, we estimate it represents less than 30% of the activity in the geographic regions. Data displayed for the current year showcases only the current year data. Depending on the time of year, this map view may only represent a small number of testing months.”

This means that these parasites and diseases are likely three times as prevalent as the map indicates! You can use their Parasite Prevalence Maps to go back as far as 2012 to see the pervasiveness of intestinal parasites, heartworms, tick-borne diseases, and viral diseases. You can even sign up to receive updates on the prevalance of these diseases in our area.